It’s the best flying quad I ever had using the PIDs on your website.

I thought I was ok at tuning, then I tried the Supafly tuning…never had a quad tuned that well lol..

Building a high performance freestyle quadcopter is a complicated task, and many pilots usually settle for ‘stock tuning’ which the flight firmware comes with because the mere construction is enough of a challenge, let alone learning about gyro filtering and PID control theory…Stock tuning however is usually a low performance compromise in order to be safe and applicable across a broad range of different types of quadcopter build. Sure it flies ‘ok’ but the PIDs are usually much lower and the filtering much higher than necessary resulting in a loose and latent performing build-it is like driving a Ferrari with tyres half inflated. However knowing what to change and by how much can seem baffling and the result is often a lot of head scratching when most people would rather just fly…With Supafly, there was a motive to spend that time for the sake of the customers in order to offer something extra, not to mention an inherent interest to genuinely understand the tech.

A well tuned quad feels ‘locked in’ which is the traditional FPV description of the way it feels to have the correct amount of P and I term holding and moving the quad in response to stick movements. Any slack or heavy feel is now gone. This typically encourages more confident and better flying because of the subconscious effect of having a positive feeling of control, as well as smooth HD video. The Flipmode and Juicemode frames have been purposefully designed to have low frame resonance, which allows us to run a custom low filtering setup. Countless hours have been spent logging and analysing with PID Toolbox and Blackbox to perfectly place the filters and PID gains which not only saves the user endless tweaking, but also results in a shockingly good flight performance which surprises new and experienced pilots alike – check the responses at the bottom of the page for user feedback…. 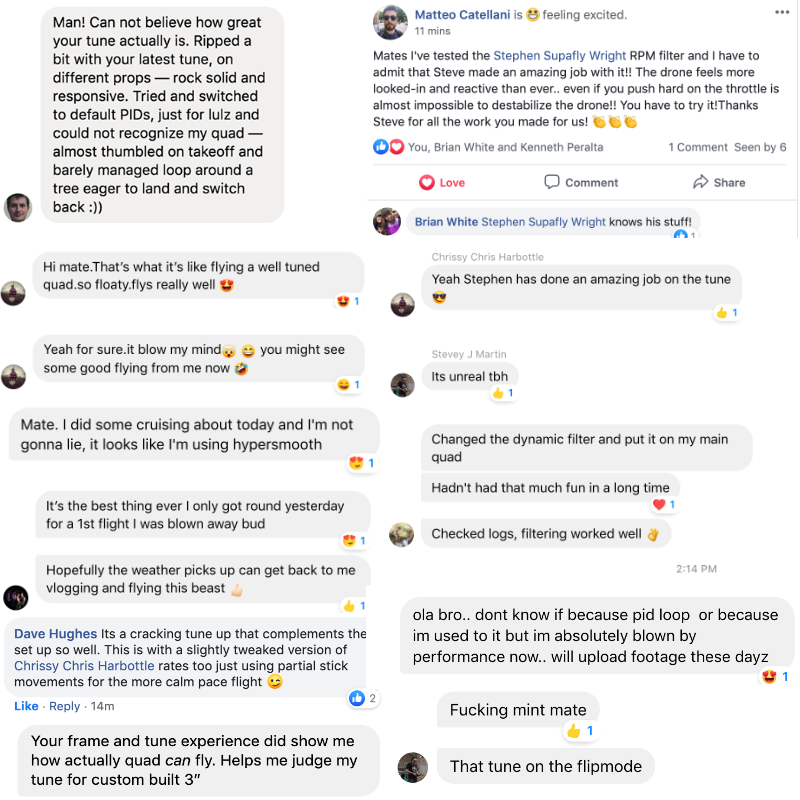 Hi - any questions let me know
×
We use cookies to ensure that we give you the best experience on our website. If you continue to use this site we will assume that you are happy with it.Ok